LABSA (Linear Alkyl Benzene Sulphonic Acid) is produced by the sulphonation reaction of Alkyl Benzene with Sulphur trioxide (SO). Some other processes might desire the use of Oleum or Sulphuric acid. The final decision will depend on various factors which might include the availability of raw material, location of the plant, the size of the plant, operation mode of the plant, to mention a few. Nevertheless, considering major factors such as cost, availability, flexibility and safety, SO still remains the preferential reagent for the reaction which is as shown on the flow sheet.

Linear Alkyl Benzene Sulphonic Acid is one of the major active ingredients for the production of soaps and detergents. Importantly, it forms a greater percentage of raw materials for the production of liquid soaps. LABSA is an anionic surfactants with molecules characterized by a hydrophobic and a hydrophilic group. They are nonvolatile compounds produced by sulfonation. Linear alkylbenzenes (sometimes also known as LABs) are a family of organic compounds with the formula C6H5CnH2n+1.

They are mainly produced as intermediate in the production of surfactants, for use in detergent. Since the 1960s, LABs have emerged as the dominant precursor of biodegradable detergents. Linear Alkyl Benzene Sulfonic Acid is the largest-volume synthetic surfactant because of its relatively low cost, good performance, the fact that it can be dried to a stable powder, biodegradable and environment friendly. Alkyl benzene sulfonic acid is used as anionic surfactant in the formulation of many washing compounds.

This sulfonic acid is one of the cheapest surfactants in the washing industry and is the most important and most consumable substance in a powder formulation and pure liquids.

LABSA are complex mixtures of homologues of different alkyl chain lengths (C10 to C13 or C14) and phenyl positional isomers of 2 to 5-phenyl in proportions dictated by the starting materials and reaction conditions. 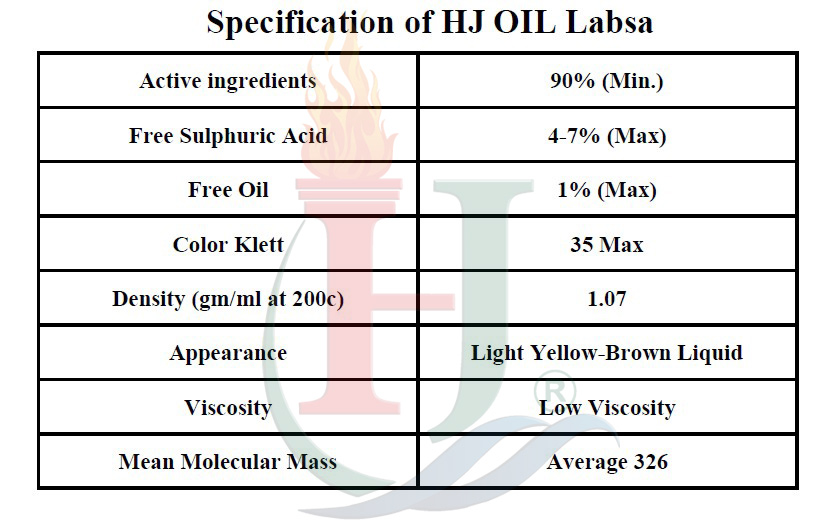