Chemical surface-active agents, which serve as emulsifiers, are classified by the electrochemical charge that is attained when they dissociate in a water solution. In the case of anionic emulsions, the chemical charge is negative. The chemical type and quantity of surface-active agent used in the manufacturing process govern the process in which the resulting asphalt emulsion can be used.

The term anionic bitumen emulsion is derived from the migration of particles of bitumen under an electric field. The droplets migrate toward the anode (positive electrode), and hence the emulsion is called anionic. In an anionic emulsion, there are “billions and billions” of bitumen droplets with the emulsifying agent at the water bitumen interface. The tail portion of the emulsifying agent aligns itself in the bitumen while the positive portion of the head floats around in the water leaving the rest of the head negatively charged and at the surface of the droplet. This imparts a negative charge to all the droplets. Since negatives repel each other, all the droplets repel each other and remain as distinct bitumen drops in suspension. A typical anionic emulsifying agent is shown below along with a diagram showing the orientation of the agent at the bitumen-water interface and the negative charge imparted to each drop.

The difference is that the anionic bitumen emulsion is negatively charged, while the cationic emulsions are positively charged. The choice of emulsifier used in the preparation of the emulsions determines the efficiency and reliability of the product.

Unlike cationic emulsions, which readily interact with alkaline and acidic minerals, anionic emulsions are less versatile and work well only with alkaline minerals.
The amount of emulsifier applied influences emulsion breakdown rate, i.e. the time until the bitumen precipitating from the emulsion, returns to its original state. 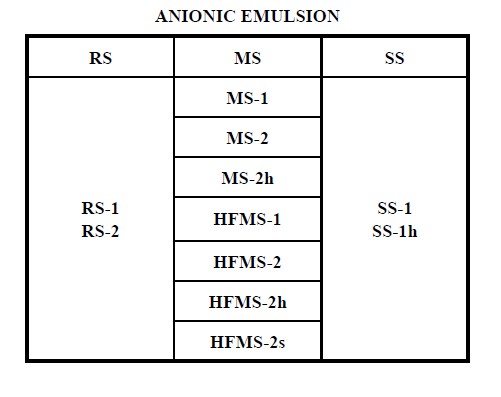