Bitumen emulsion is a mixture of water & asphaltum. Hey wait, we know that bitumen is a oil product and it cannot be mixed with water. That is why we add an emulsifier (a surface active agent) with water before adding bitumen. Addition of emulsifier with water facilitates breaking of asphaltum into minute particles and keeps it dispersed in suspension.Therefore we can say that bitumen emulsions are a liquid product consisting of three things, (i.e. water + Emulsion + Asphaltum) where droplets of Asphaltum are suspended in water.

Bitumen emulsions are usually dispersions of minute droplets of bitumen in water and are examples of oil-in-water emulsions.
The bitumen content can be varied to suit different requirements and is typically between 30% and 70%. The primary objective of emulsifying bitumen is to obtain a product that can be used without the heating normally required when using cutbacks and paving grade bitumen. In the manufacture of bitumen emulsions, hot bitumen is sheared rapidly in water containing an emulsifying chemical (emulsifier). This produces very small particles of bitumen (the dispersed phase) dispersed in water (the continuous phase). The bitumen particles are stabilised in suspension and do not readily coalesce due to the presence of the emulsifier, which is concentrated on the surface of the bitumen particles. During application, the water in a bitumen emulsion is either lost by evaporation, or it may separate from the bitumen because of the chemical nature of the surface to which the emulsion is applied. This process is referred to as breaking. Because Asphaltum has a density only slightly higher than water, sedimentation of the Asphaltum droplets in an emulsion during storage is very slow. Emulsions can usually be regenerated after long storage times by gentle stirring to redisperse the bitumen droplets.

Can be transported in bulk to distant locations with tank relays (or barrels), preferably oil barrels.
Ability to use asphalt with low thickness.
High pavement speed.
Suitable for all types of asphalt and laminate.
No need for heating during storage, handling and spraying.
Can be used at ambient temperature.
Suitable permeability due to high fluidity.
On wet surfaces, it can also be used.
The complexity of the machinery required and the ease of use.
Full compliance with the environment, both in the manufacturing process and in the process of shipment, spraying and failure.
Emulsion bitumen breaks rapidly against rock and air (only 2 to 15 hours)
Non-toxic and odor-free.
No fire during storage, handling and handling.
The color changes from brown to black after the emulsion bitumen breaks down and prepares to move or apply the next layer of asphalt.
In order for the emulsion bitumen to be effective during spraying, proper alignment of the nozzles is necessary (at least two nozzles must cover the spray area). To prevent the bitumen from being cold, it should be stored at 20 to 50 C and have a shelf life of about 4 months.
In the case of a mixer or stainless steel or Teflon mixer, the product remains homogeneous and blended for up to 4 months in order to stir the emulsion bitumen.
To hold the tank, the emulsion bitumen should be pumped from the bottom of the source, not top-to-bottom, and not clogged and separated.
The emulsion bitumen should be sprayed or sprayed, without heating, to the desired level (walls, ceilings, roofs, floors and pool walls, toilets, etc).
It dries very quickly and, despite being well-watered, is more economical than MC (bitumen).

When the emulsion is being produced the cations are adsorbed by asphaltum droplets, negatively ions remain in the water. The undeniably most complete field of use is represented by the rapid setting emulsions.

Most often, fatty acid and resin acid alkaline salts are used. They are obtained by saponification of the liquid resin, called Tall-Oil. This substance is a residual, distilled substance, a by-product of the paper pulp industry from resinous wood treated using the “sulfate” process.

The characteristics of an emulsion are designated by the terms rapid (R), medium (M) and slow (S). The main grades for bitumen emulsions are classified as follows:

The coating of the bitumen particles by the emulsifier gives them an electrostatic charge. Depending on the type of emulsifier, this can generally be either negative or positive. The interaction of the charged particles is the reason it is possible to make emulsions that do not rapidly revert to the separate phases.

Emulsion Bitumens primarily used for tack coats for use in between hot mix asphalt layers and prime coats for thin hot mix surfacing layers or a chip seal pavements.
– It can be used in damp environment on wet aggregates
– Road repair work can be carried out in minimum time
– Provides better tack coat with better workable conditions
– It can be used in any season
– Since heating is not required it can’t pollute air
– Long storage stability in clean containers/Tanks

Advantages and Uses of Bitumen Emulsions are: 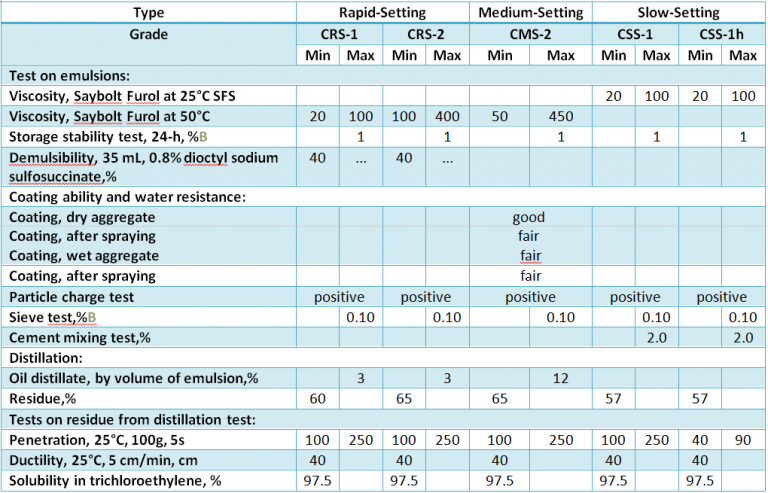